Got a red light and/or speed camera ticket? Do you want to fight it in court and win? LEARN THE TRICKS NOW: 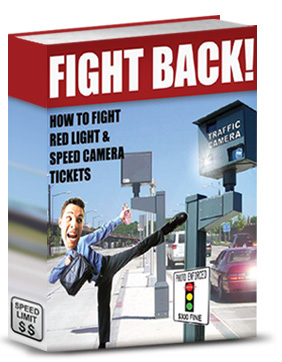 PhantomALERT will teach you how to fight a red and speed camera tickets. Instead of just surrendering your wallet infairly to the government, you can learn what you need to know to fight those tickets honestly.

Register for free to get a complementary e-Book that will teach you how to legally and honestly fight traffic tickets.

Read this testimonial from Donya Inman

In early October, I received citation in the mail citing that I had committed a red light violation a few days earlier that would cost me $361 plus a transaction fee. The photograph on the citation, endorsed by the City of San Bernardino, did not clearly illustrate to me what violation had occurred because the caption did not correspond to my action in the picture. Needing more evidence, I reviewed the accessible online video. Instantly, I realized that a photograph was captured prior to my entering the intersection and that the vehicle in front of me had activated the camera.

2. How I Found the eBook "Fight Back: How To Fight Red-Light and Speed Cameras":

The intersection was one that I pass everyday on my route to work, so naturally I was astounded to discover that recording devices were installed in my city without my prior knowledge. With the general familiarity I had with enforcement agencies and the how they had little concern for individual inquiries, I knew I could neither approach the city nor the local police department for help. I performed a quick keyword search online for the history, the controversy, and the future of red-light cameras in my area. I came upon a press release for a product that I had never heard of named PhotoBlocker. I found many other interesting articles on the manufacturer’s website, about the frequent and widespread problems with red-light cameras. The dedication that PhantomPlate had for this type of concern is what convinced me to contact them.

3. What the eBook Did for Me:
According to the eBook , enforcement agencies collect millions of dollars in revenue from ticketing red-light violators, often gaining from innocent drivers. Plus, I witnessed that the same system that took my picture had malfunctions as evidenced by intermittent camera flashes I saw on a recent rainy day.

Originally, I called the toll-free phone number listed on the citation, and the service representative refused to re-evaluate my videotaped incident, saying that the photographs were enough evidence to prove that I should pay my ticket. Of course I begged for an alternative. My other option was to make an appointment to meet with the San Bernardino Police Department. At that point, I was sure the appointment would be useless.

After sending a brief email about my problem to PhantomPlate, Marketing Director Joe Scott responded within 48 hours. During that short time, he notified his network of professionals who could help. The company’s attorney (author of "Fight Back: How To Fight Red-Light and Speed Cameras") was willing to do more research for me about my city’s enforcement laws and surveillance equipment, its frequency of wrongful citations, and how he could help fight my $361 ticket. All of the representatives at PhantomPlate were organized and were able to summarize a plan to approach the Police Department on the day of my appointment.

4. The Police Deparment’s Response:
Armed with know ledge from the eBook “Fight Back! How to fight a red light and speed camera ticket.” I headed to the police department. After waiting in the lobby for over an hour, a police officer finally arrived to view my videotaped incident. After replaying the video a dozen or more times, the officer still asked me why I wanted to fight the ticket. I answered by questioning why I was targeted when the car in front of me clearly ran the red light. His response was that the other car probably received a ticket too. As an attempt to intimidate me, the officer told me that if I wanted to fight this in court, a judge would name me guilty, as well. I wondered why he did not care that I might not have received a ticket at all if the other vehicle had not activated the camera. I proceed to asked more questions: Was the equipment properly calibrated? When and by who? If I go to court, are the blurry photographs legally sufficient to use as evidence? Why was this vehicle (my car) photographed before a violation could occur? Are you aware that there are glitches in the equipment? How long do I have to appeal? After weakly answering a few questions and admitting that the camera had glitches in the past, the officer dismissed my citation on the basis that my violation was “not that bad.”

That my behavior was “not that bad” makes me wonder if his decision was based on the fact that the violation was truly innocuous or if it was because he felt guilty that I had waited an hour past my appointment time. Either way, the final judgment was subjective and even the police authority agreed that the red-light camera (a decisive-less judge) determined a violation that a live enforcement expert would not have made. A live expert would have been able to determine that I caused no harm or danger to the flow of traffic. After all, isn’t safety the important determining factor?

The officer never admitted that I was not the one who triggered the red-light camera. I strongly believe that if I did not have the confidence instilled by the Phantomplate attorney, I would have given in to paying the costly ticket, just as many others have.

5. eBook to the Rescue:
Had I not found the services provided by the eBook "Fight Back: How To Fight Red-Light and Speed Cameras", I surely would have been robbed of over $400 right in the middle of the holiday season, not to mention acquiring a few points on my driving record, taking time off to deal with traffic school, and undergoing a rate hike for my auto insurance.

In spite of everything, I still do not understand how a red-light camera promotes safety. If enforcement agencies really cared about our safety, they would implement a program to PREVENT reckless driving behavior—not allow reckless behavior and then profit from it! Plus, I think this type of surveillance only promotes more law-breaking behavior because it forces drivers to come up with their own solutions to costly tickets, which could include driving without plates or VINs, wasting the time of enforcement agencies by filing complaints, or simply ignoring mailed citations.

I think red-light cameras will continue to cause problems if motorists do not fight the system. Presently, the only way to fight red-light citations is using PhotoBlocker spray and visiting www.phantomalert.com for advice and to keep informed about the issues surrounding the changing structure of law enforcement agencies. From now on, I won’t allow myself or my family to drive anywhere without PhantomALERT!